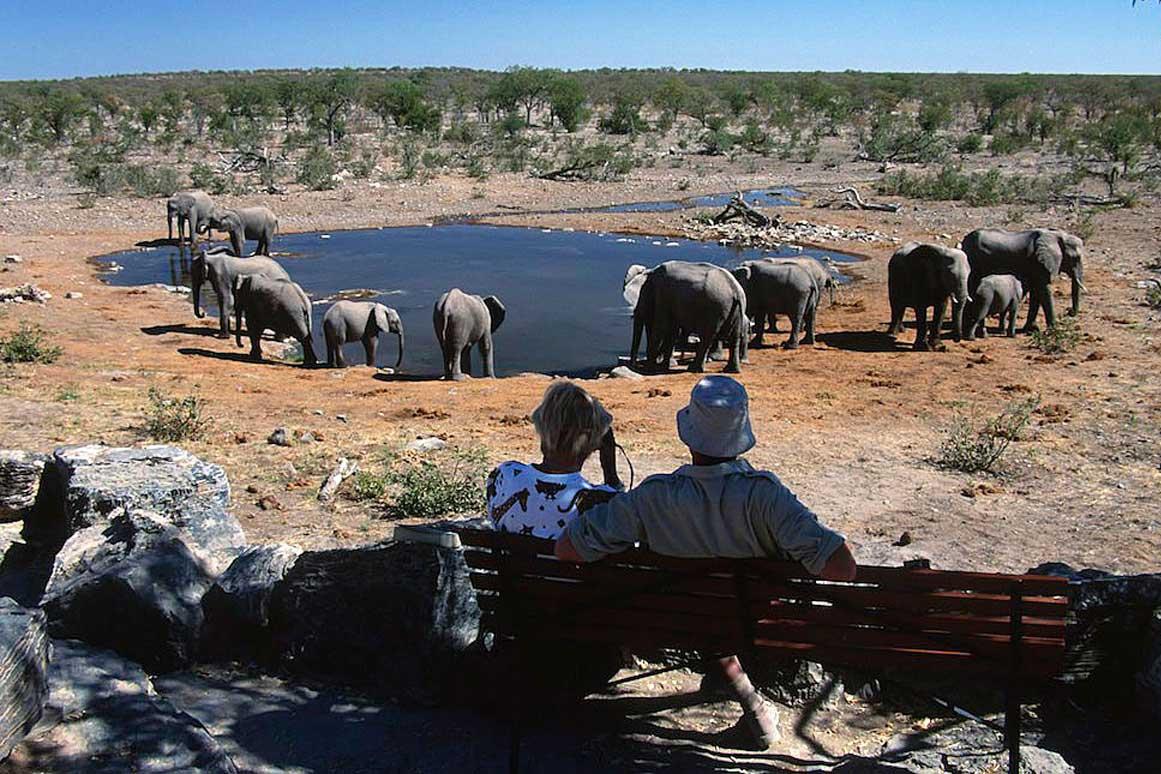 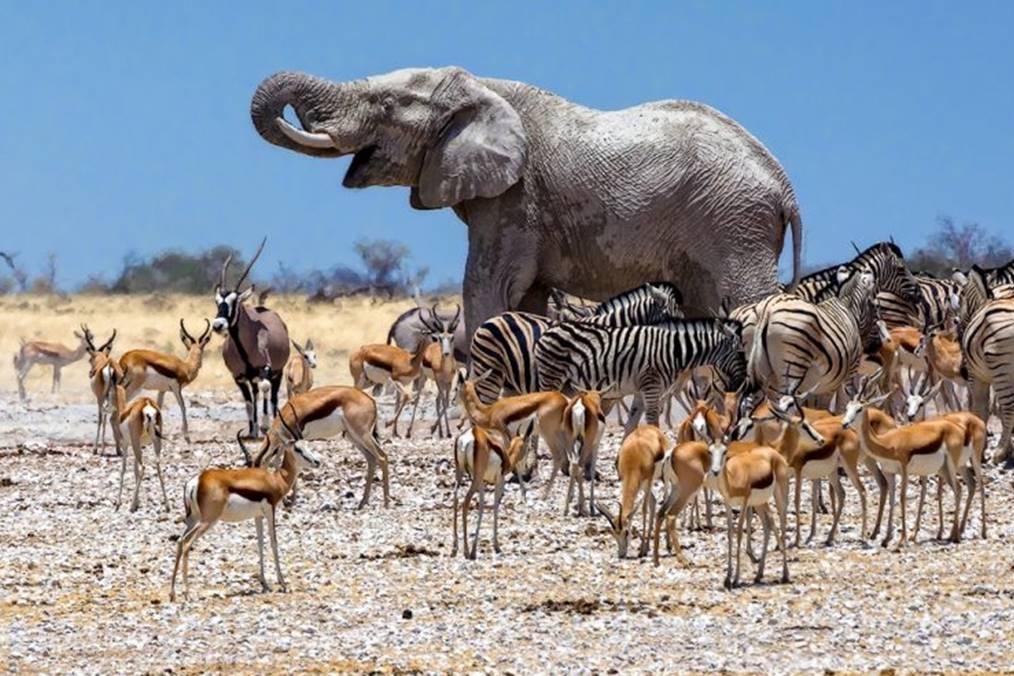 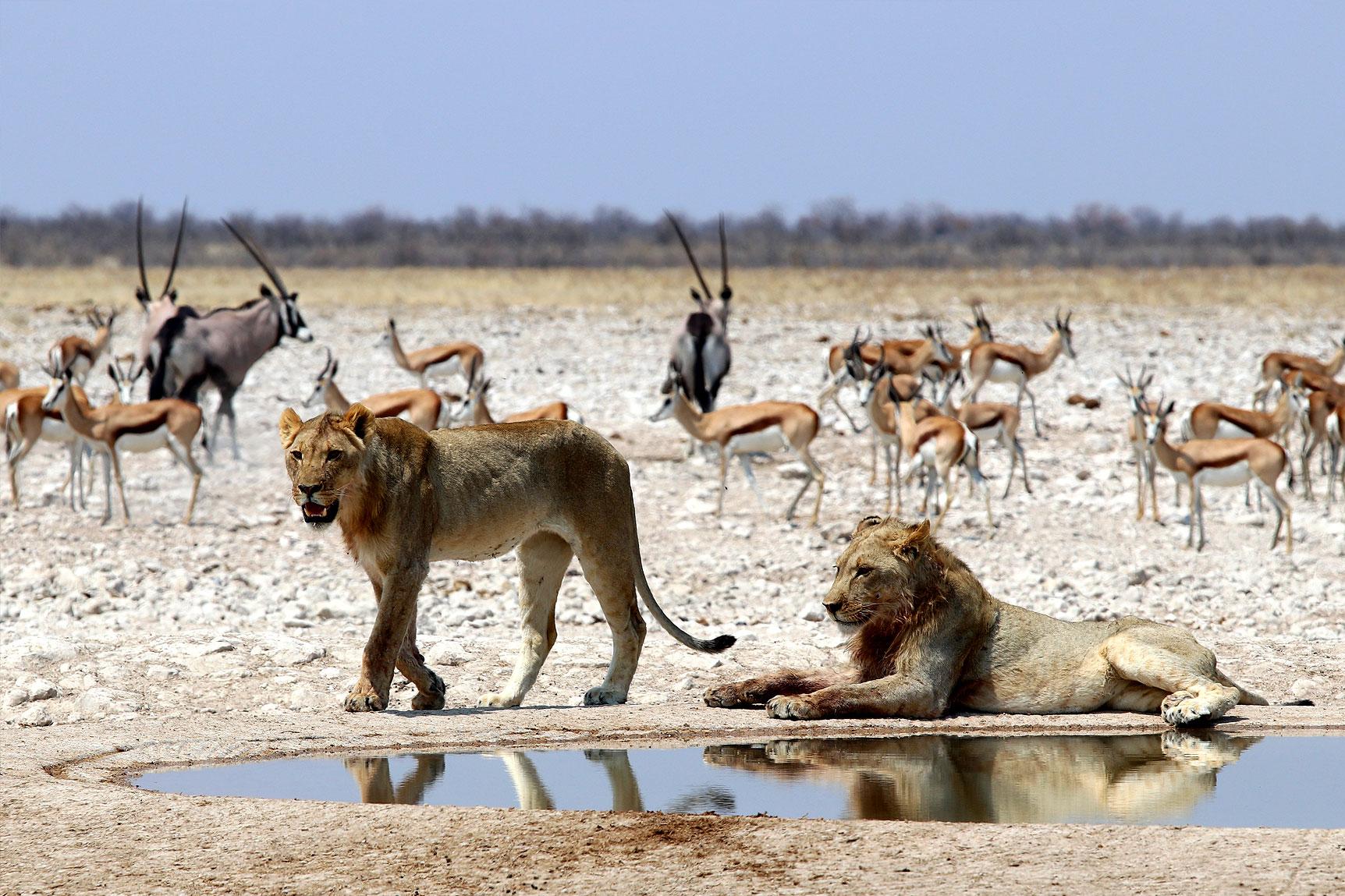 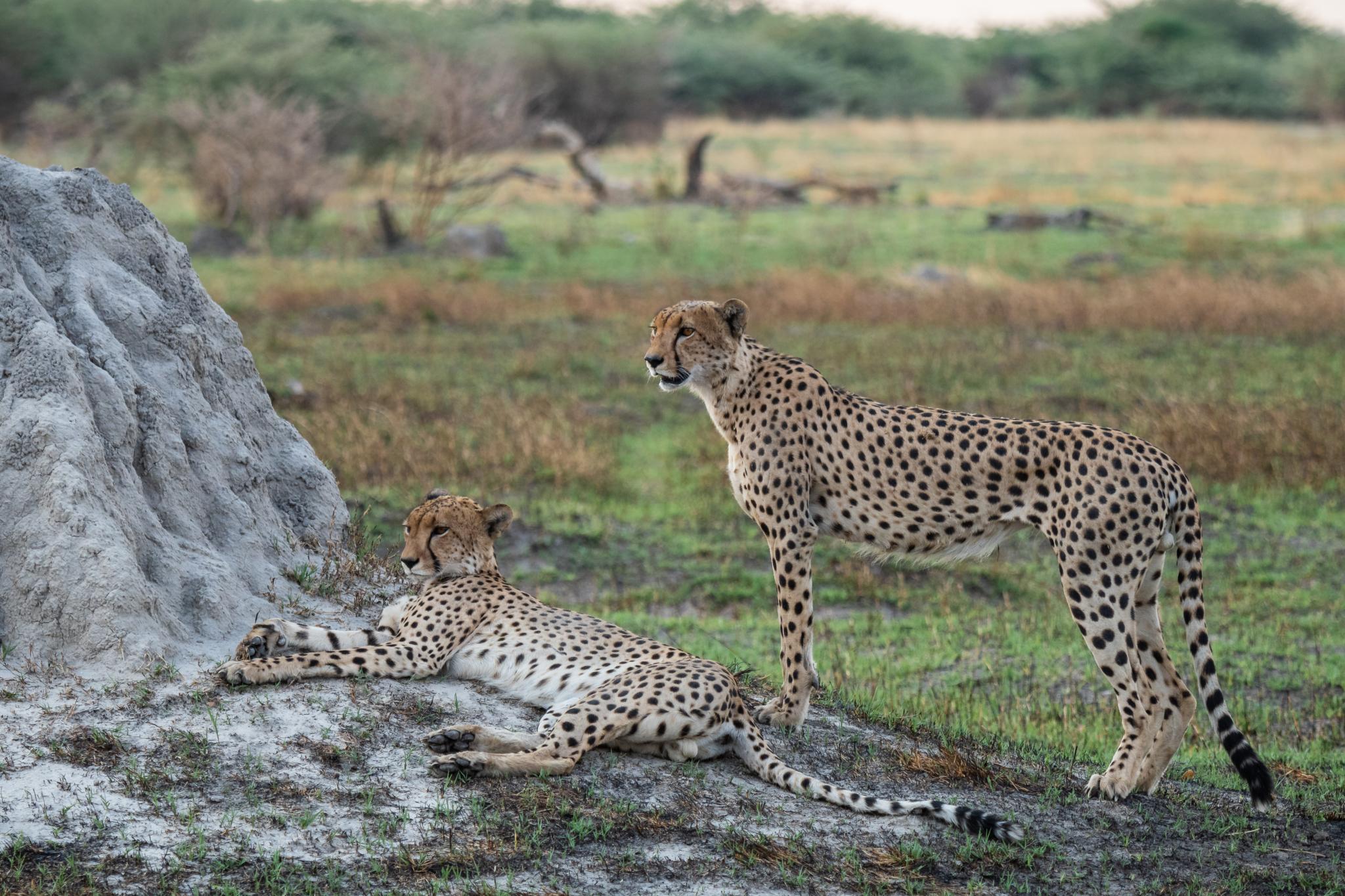 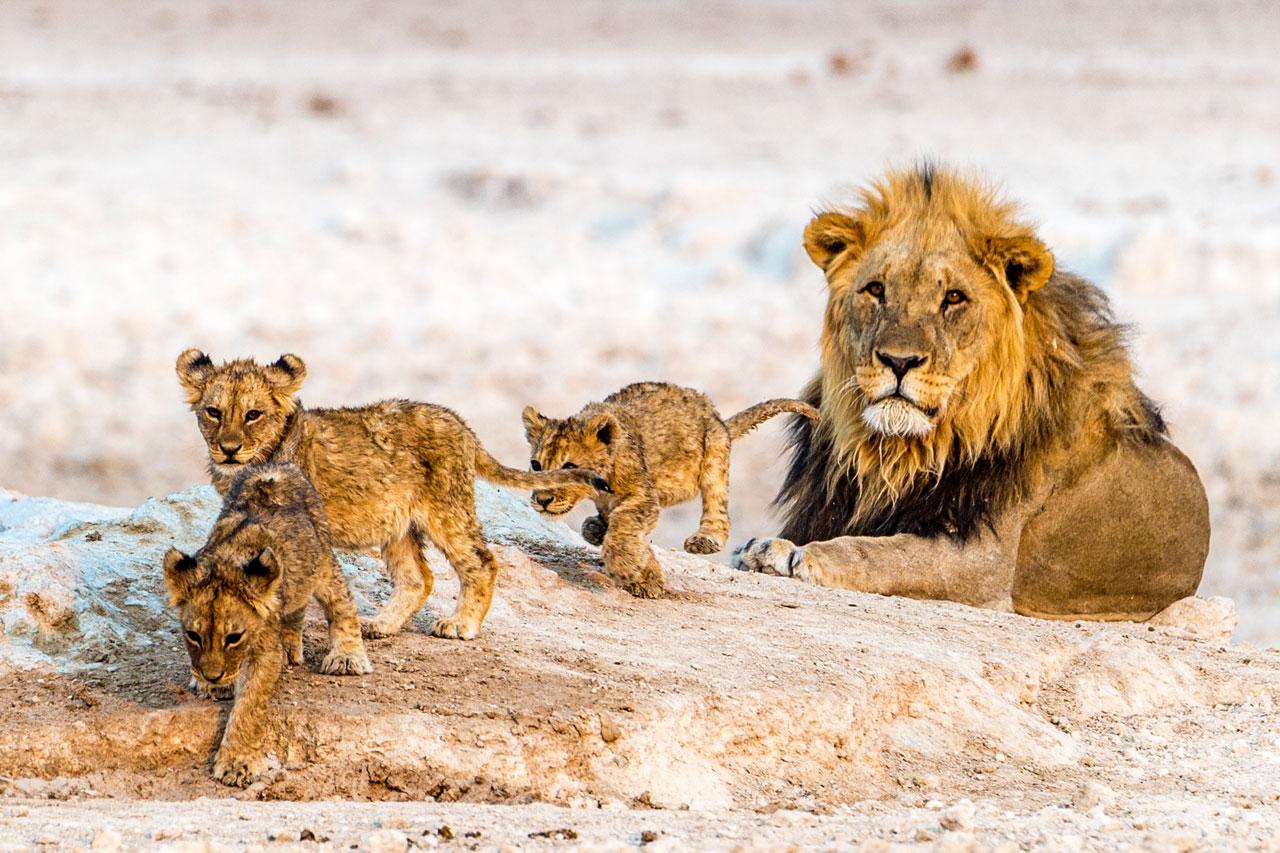 Etosha National Park is a national park in northwestern Namibia. It was proclaimed a game reserve in March 1907 in Ordinance 88 by the Governor of German South West Africa, Dr. Friedrich von Lindequist. It was designated as Wildschutzgebiet in 1958, and was elevated to the status of a national park in 1967 by an act of parliament of the Republic of South Africa. It spans an area of 22,270 km2 (8,600 sq mi) and gets its name from the large Etosha pan which is almost entirely within the park. The Etosha pan (4,760 km2 (1,840 sq mi) covers 23% of the total area of the National Park. The park is home to hundreds of species of mammals, birds and reptiles, including several threatened and endangered species such as the black rhinoceros.

The park is located in the Kunene region and shares boundaries with the regions of Oshana, Oshikoto and Otjozondjupa.


Let's face it: most visitors to Namibia are Africa first-timers and they want to see animals. Big ferocious animals that they've only ever seen on telly or in pictures. And for that, we have Etosha National Park, one of Africa's greatest game reserves and an assured safari experience second to none.

the full quota of wildlife including elephant, lion, leopard, black and white rhino, cheetah, caracal, brown and spotted hyena, giraffe, zebra and many antelope, the mammal count is impressive - 114 to be precise. Birdlife is equally impressive with 340 species on record including a high proportion of raptors.

The unique natural waterholes that surround an ancient pan attract a daily parade of wildlife and staying in the park gives you a floodlit spectacle to boot. Stay in the private parks on the edge, take a guided safari through the park or just sit at a waterhole with a thermos and your binos - whichever way you want to experience it, Etosha is the genuine African safari experience.

Etosha National Park in northern Namibia offers you the chance to spot game in a wonderful natural setting. Enjoy a fascinating African wildlife adventure in Namibia during day and night ...
Read More...

The drive to Etosha will take about 4 to 5 hours, but it is a fantastic way to get to know the “lie of the land” here in Namibia. We ...
Read More...

Located just south of the boundary of Etosha National Park in North-western Namibia, Etosha South makes up the southern region of this wild paradise. The national park can be accessed ...
Read More...

What better way than to end an exciting day of game-viewing in Etosha with a relaxing Sundowner Drive. We depart from the Etosha Village in the late afternoon ...
Read More...

Our sunrise nature walk takes place along a beautiful footpath winding through the lush Mopane Forest. Our knowledgeable guide will focus on tracks, indigenous tree species and local ...
Read More...

Do you like camping, but shy away from the strenuous packing of camping equipment? Camping2Go is the perfect solution for the independent and light-hearted traveller, who loves to be close ...
Read More...

Gabus Game Ranch is a 6200 hectare game lodge in Namibia situated only 8km from the B1 main road passing through Otavi, Namibia. The beautiful mountains and savannah-grasslands are home ...
Read More...

Join us at this stylish lodge overlooking a vast expanse of mopane woodland. Space is an attractive element at Etosha Safari Lodge with its lavish view, spacious deck- and dining-area ...
Read More...

On the eastern doorstep of world-famous Etosha National Park, in the mopane woodland of the region, lies Mokuti Etosha Lodge, a flagship of Namibian safari hospitality. Charming thatched buildings in ...
Read More...

The latest addition to the Mushara Collection of exquisite accommodation establishments is the “Mushara Bush Camp”, situated a mere 10 kilometers from the Von Lindequist gate of the world famous ...
Read More...

Okaukuejo, located 17 km from the southern entrance of the Etosha National Park, is famous for its flood-lit waterhole, where visitors can observe at close quarters a spectacle of wildlife ...
Read More...

Dolomite Resort is located in a previously restricted scenic area in the western region of Etosha National Park, rich in biodiversity due to the absence of mainstream tourism. The dolomite ...
Read More...

​The Fort is unlike any other, the only one of its kind in Namibia. It is built in exactly the right spot to give guests probably one of the best sunset ...
Read More...

First up is Etosha National Park, seemingly dry and dusty but bursting with life in all shapes and sizes. We will enjoy this gem of ...
VIEW ITINERARY

Our popular 8-Day Classic Namibia Safari will take you to many of Namibia’s must-see natural wonders. We will visit the vast Namib Desert, a UNESCO ...
VIEW ITINERARY

Namibia is a country that many people associate with the desert, and it is indeed probably the best location in the world in which to ...
VIEW ITINERARY